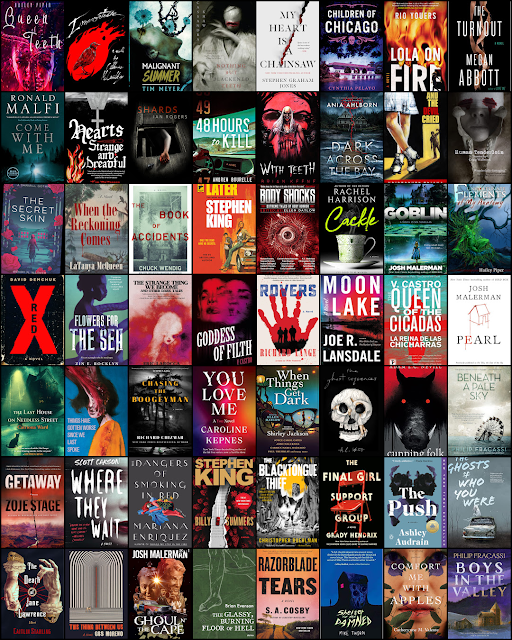 Let me explain the graphic-the first 37 books starting with Queen of Teeth and ending with When Things Get Dark are my favorite reads of 2021. My highest recommendations. The rest of the books are ones that are on my priority stack and so I felt they should be included because I can only read so much. I read 156 books this year, but I read a bunch of previously released titles too. You can find my favorite backlist books I read this year HERE
I'm currently in the middle of reading The Ghost Sequences by A.C. Wise and Cunning Folk by Adam Nevill and enjoying them so much, they have to be on this list. I have three Josh Malerman titles on here because he's a favorite author, but I did not have time to read Ghoul in the Cape--but for sure it makes my noteworthy releases for 2021--so that's how I'm playing it this year. Without anymore prefacing, the 37 in no particular order:

Nothing But Blackened Teeth by Cassandra Khaw (GHOSTS, Haunted)

Come With Me by Ronald Malfi (murder mystery/grief horror)

Shards by Ian Rogers (this is a free read on Tor.com) (found footage)

With Teeth by Brian Keene (VAMPS!)

Dark Across the Bay by Ania Ahlborn (domestic thriller)

And The Devil Cried by Kristopher Triana (fucked up crime noir)

When the Reckoning Comes by LaTanya McQueen (antebellum era horror)

Flowers for the Sea by Zin E. Rocklyn (Dark Fantasy/Feminism)

Must read on my TBR for 2021
The Ghost Sequences by A. C. Wise
Cunning Folk by Adam Nevill
Beneath A Pale Sky by Philip Fracassi
Getaway by Zoje Stage
Where They Wait by Scott Carson
Dangers of Smoking in Bed by Mariana Enríquez
Billy Summers by Stephen King
The Blacktongue Thief by Christopher Buehlman
The Final Girl Support Group by Grady Hendrix (final girl/book about movies)

The Push by Ashley Audrain

The Ghosts of Who You Were by Christopher Golden

The Death of Jane Lawrence by Caitlin Starling

This Thing Between Us by Gus Moreno

The Ghoul in the Cape by Josh Malerman

The Glassy, Burning, Floor of Hell by Brian Evenson

Razorblade Tears by S. A. Cosby

Shelter for the Damned by Mike Thorn

Comfort Me with Apples by Catherynne M. Valente

Boys in the Valley by Philip Fracassi

Posted by Sadie Hartmann at 6:18 AM